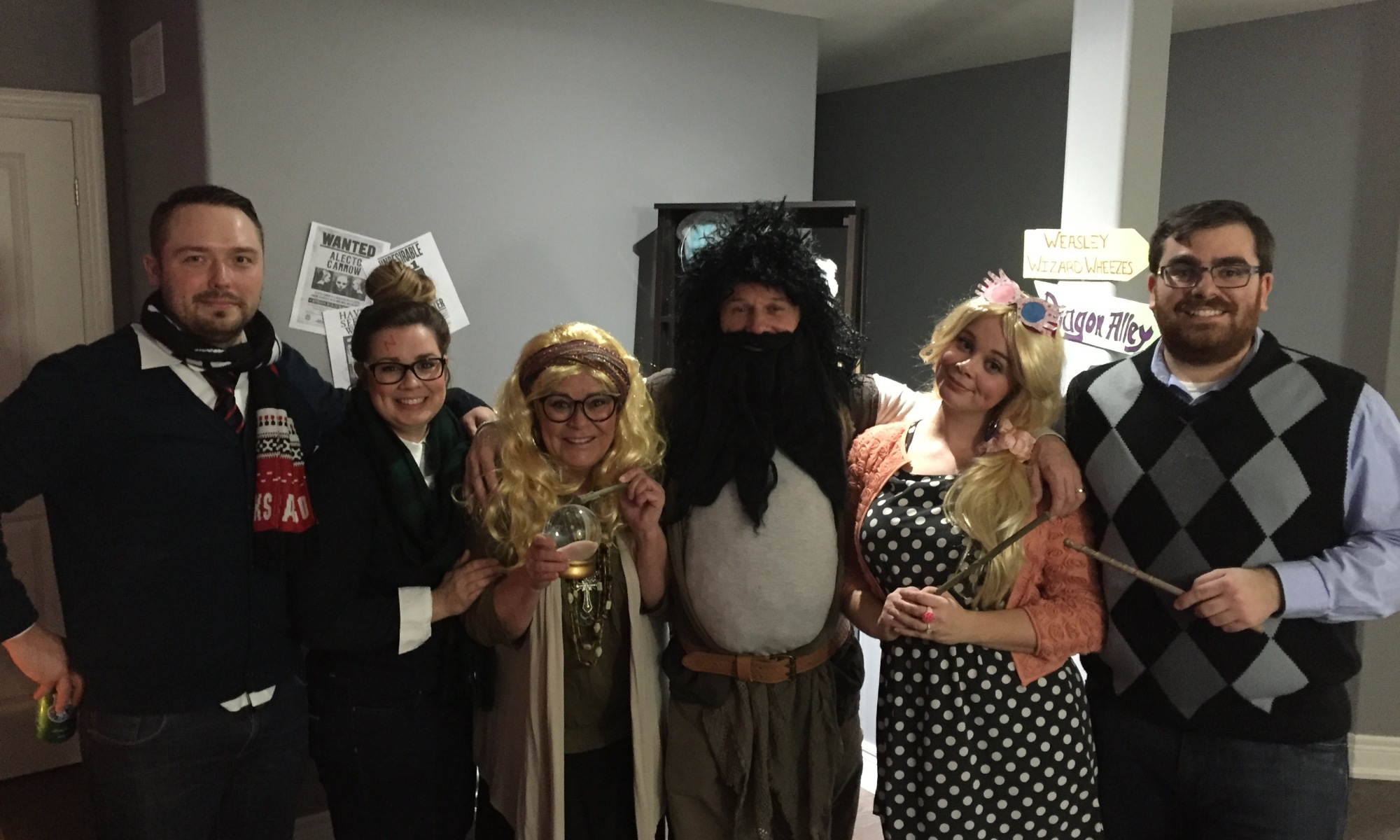 If you’ve read my About Me section, or if you know me even a little, you know that I am OBSESSED with Harry Potter. I’ve read all the books, I’ve seen all the movies (multiple times), I know all the secret information J.K. Rowling has divulged over the years and I try to work HP into my daily conversations as much as possible. I’m even planning a pilgrimage to the Harry Potter Trail in Scotland in August.

A couple of years ago, when this blog was just an idea I never thought would make it to reality, I decided to throw a Harry Potter party and figured my birthday was the perfect occasion for such an affair. I spent hours on Pinterest getting ideas, I re-watched the movies and re-read the books to pick up some details I could try to work into the party. I wanted to make sure to include as much reference to the Wizarding World as I could even though some of the people that were coming had little to no knowledge of Harry Potter. I knew that those who did would appreciate my attempt to incorporate some of the small details, but even those who were HP-virgins would at least enjoy the atmosphere. I invested a lot of time and energy into planning the perfect party. Today I wanted to share with you all the details of the party I planned and provide you some links to some great (and free!) resources that you can use for your party too!

First up were the invitations. A few weeks before the party, I created invitations and sent them to my guests by email. I created the perfect invitation in the form of an acceptance letter to Hogwarts. It included party details complete with Dumbledore’s signature. I’ve included an example and a blank page for you in the links at the bottom of the page. 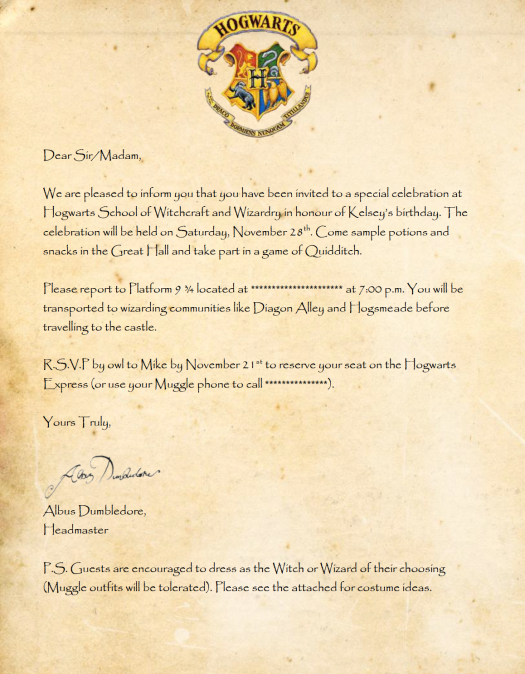 Once I knew how many people were coming, I could start planning the food. I wanted to use Harry Potter themed food, but also make sure that it was delicious and easy to prepare. Instead of trying to recreate the food of The Great Hall Feasts (think Roast Beef, Drumsticks and Bread Pudding which aren’t exactly “party friendly”). I thought about how to take a HP spin on some classic party foods. Here’s a rundown of the feast (a big thank you to my mom and sister for helping me with the food!): 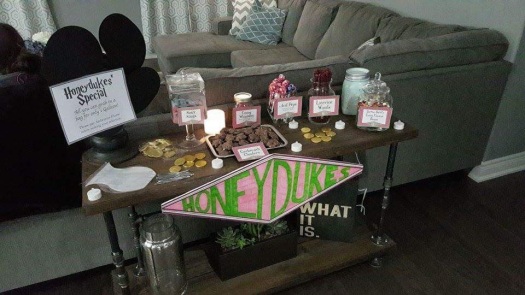 No trip to The World of Harry Potter could be complete without stopping at Honeyduke’s Candy Shop. I had a lot of fun creating a candy bar for my guests to indulge in their sweet tooth. I found some great printables online for some popular treats and added some of my own by just adding text boxes over the existing ones and creating my own. Then, I made a sign out of foam Bristol board to mimic the logo from the movies. I used a variety of glass vases and containers to hold the candy. I ended up purchases two really unique candy dishes that I knew I could reuse for my wedding in addition to some bowls, vases and trays I picked up at the dollar store. The featured sweet treats for the evening were as follows:
Chocolate Turtles – Cockroach Clusters
Twizzlers – Licorice wands
Tootsie Roll Pops – Acid Pops
Jelly Worms – Sour Slugs
Sour (Fizzing) Gumballs – Fizzing Whizzbees
Jelly Belly jely beans – Bertie Bott’s Every Flavour Beans
I also made sure to purchase some candy bags and gold chocolate coins to be used as Galleons so guests could make their purchase.

The next thing to do was plan the décor. I had so many ideas and wanted to include everything. There are so many amazing features of the books and movies to include in a party and the great part is that you can choose to include as much or as little as you’d like. I really wanted to make the ceiling look like the enchanted ceiling from The Great Hall inside Hogwarts and hang candles (fake, of course) from the ceiling, but I didn’t have enough time to create it and couldn’t convince Mike to let me poke holes in our ceiling. Even though that was missing, I was really happy with what I was able to accomplish and include.

A quick tip before I get into the details about the decorations. Anything that was handing on my walls were attached using these Command strips. They were amazing because it was super easy to put up and take down and it ensured that Mike and I wouldn’t have to touch up the paint all around the house. 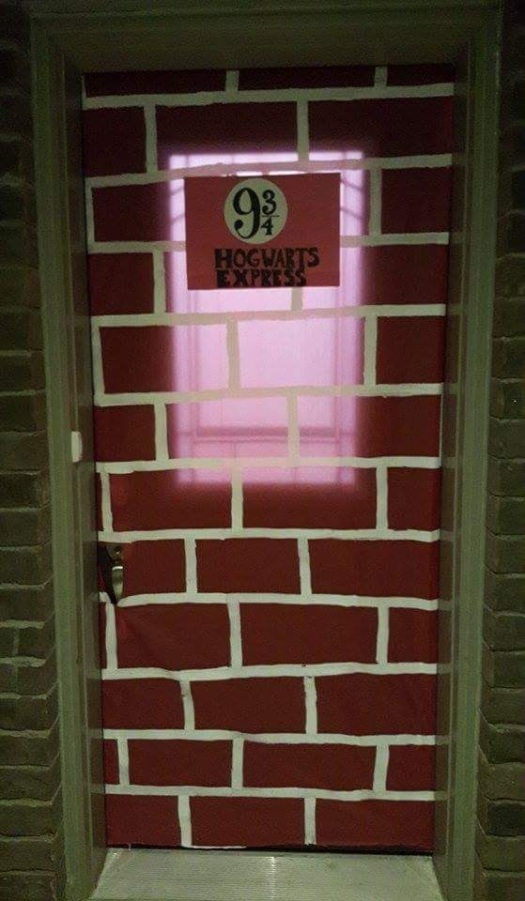 When guests entered the party, they were first required to step through Platform 9 ¾. To create this I found a red tablecloth at the dollarstore and painted the brick lines with white paint. I would have liked to create a more realistic looking brick, maybe adding some sponge painting with various colours, but I felt that the attention to detail really needed to be inside the party. Regardless of how I thought it looked, my guests loved it and it seemed that everyone could identify it as the Platform right away even if they never saw the movies. I made my own sign by cutting out a piece of foam Bristol board, covering it with red construction paper and gluing a white “9 ¾” circle I made. I then wrote “Hogwarts Express” in block letters below. 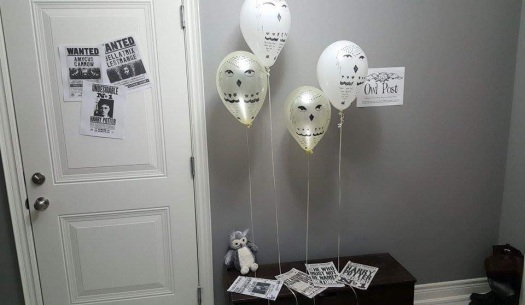 Inside, the walls were covered with “Wanted” posters I printed online. The guests were greeted by Owls delivering mail by Owl Post and were invited to catch up on the latest news by picking up their own copy of The Daily Prophet. To make the Owls, I simply drew owl faces on helium balloons and fastened them to a bench I had in my foyer. I attached paper to the end of the string to make it look like they were carrying the mail. I found some great pictures of the newspaper from the movies online. Printables for the Wanted Posters and Newspapers are below. 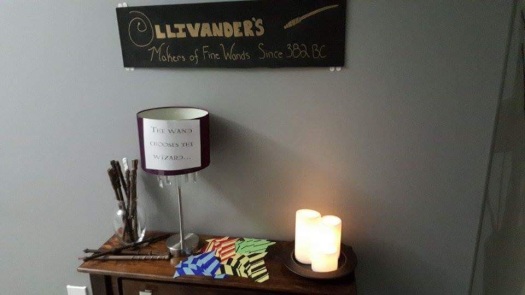 The next stop was at Ollivander’s where guests could pick up a wand (the wand chooses the wizard!). My friend and I made the wands out of wooden dowels. I purchased varying thicknesses at the hardware store, cut them into different lengths and then decorated them in unique designs. We added texture by adding beads of hot glue to the ends and forming them into different shapes. We then painted them in different colours to give each one a unique look. I made the Ollivander’s sign out of foam Bristol board and fastened it to the wall. I also made ties for each of the different houses at Hogwarts out of construction paper and placed them near the entry as well so guests could be sorted into their houses and ready to party. 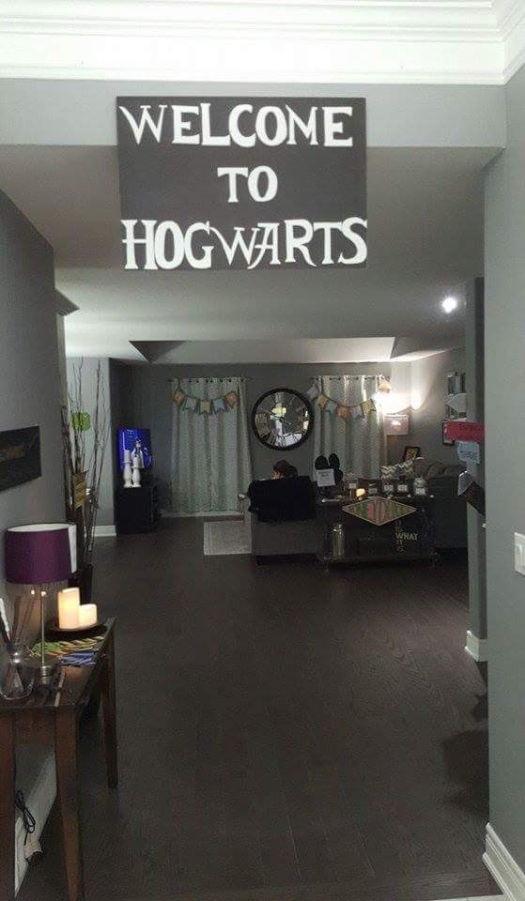 A giant “Welcome to Hogwarts” sign hung in the foyer overhead. I made the letters out of construction paper just by using some pictures online as a guide. I must say, I was really happy with how it turned out. 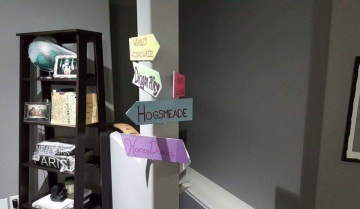 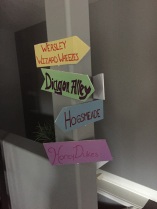 I wanted to capture the entire world of Harry Potter all in one party, so I created direction signs pointing out all the different shops and neighbourhoods like Diagon Alley, Gringott’s Bank and Hogsmeade. I attached these to a post near my staircase, pointing out Knockturn Alley in my basement below. 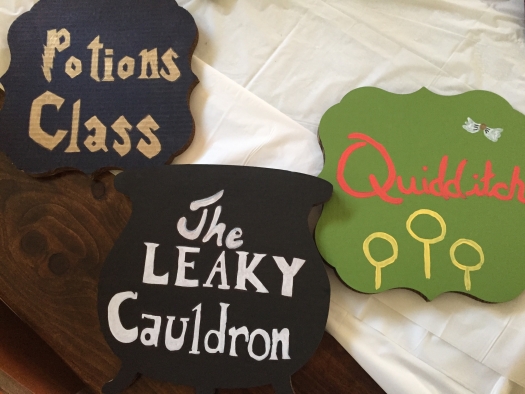 I made several signs out of cardboard shapes I found at Michael’s near Halloween and painted designs for The Three Broomsticks where the food was being served, Potions Class where guests could fix themselves a drink using a wide range of potions (the labels I taped the bottles can be found in the links below), The Leaky Cauldron for some ButterBeer and The Quidditch Pitch where guests could play a game of Quidditch Pong for some entertainment.

Here are some more pictures of the decorations I used around the party: 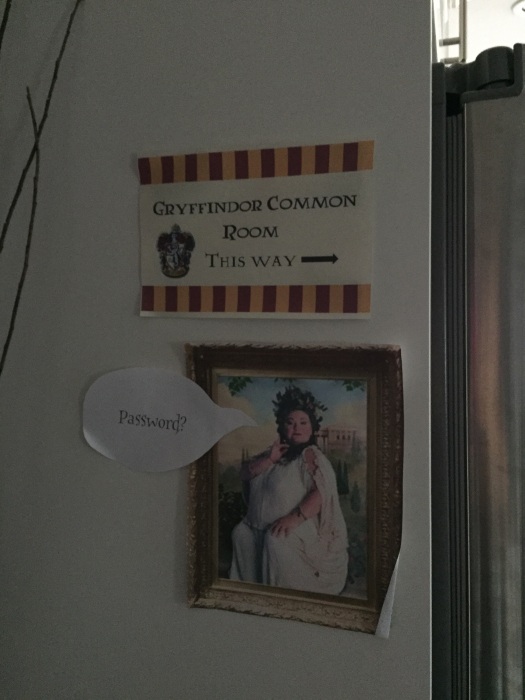 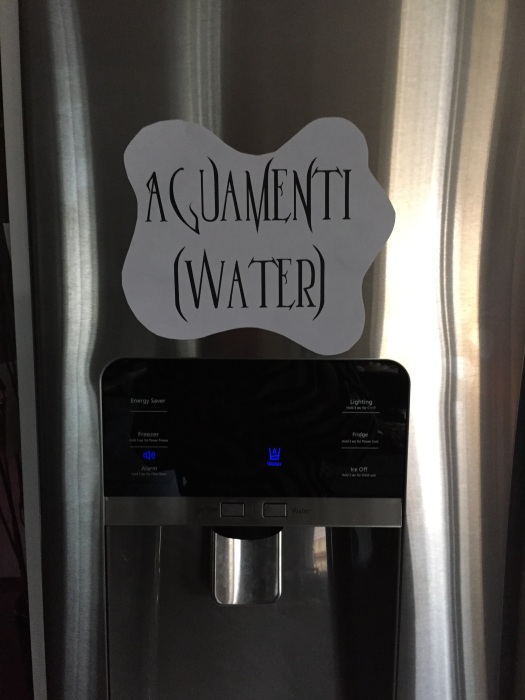 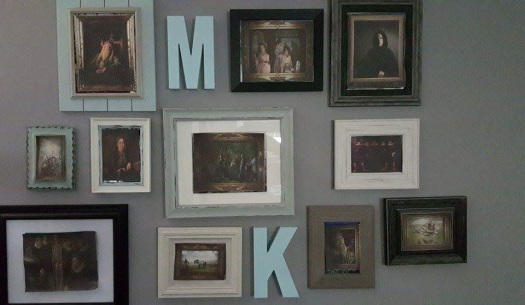 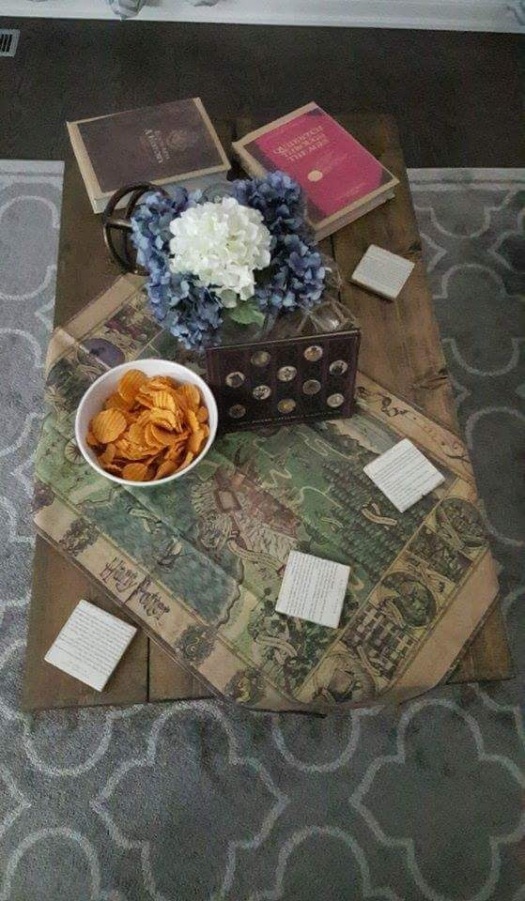 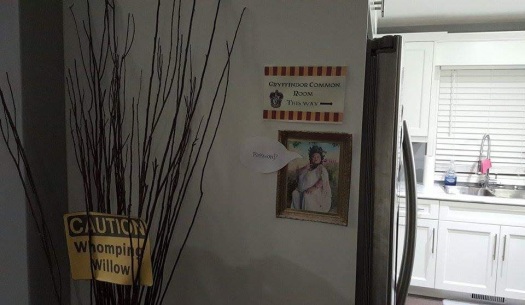 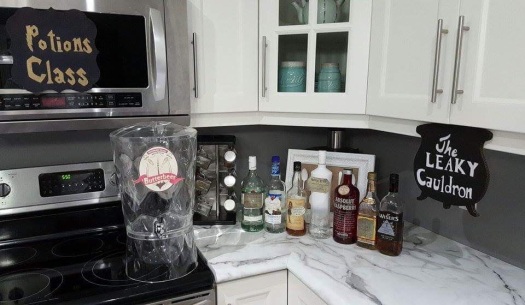 To make the Quidditch game, I bought some small pylons at the dollar store. Then I glued some wooden dowels to the top and used aluminum foil to form the hoops. I attached it all together with some glue and spray painted it all gold. We wanted to play it outside on our deck, but the rain relocated the match inside. 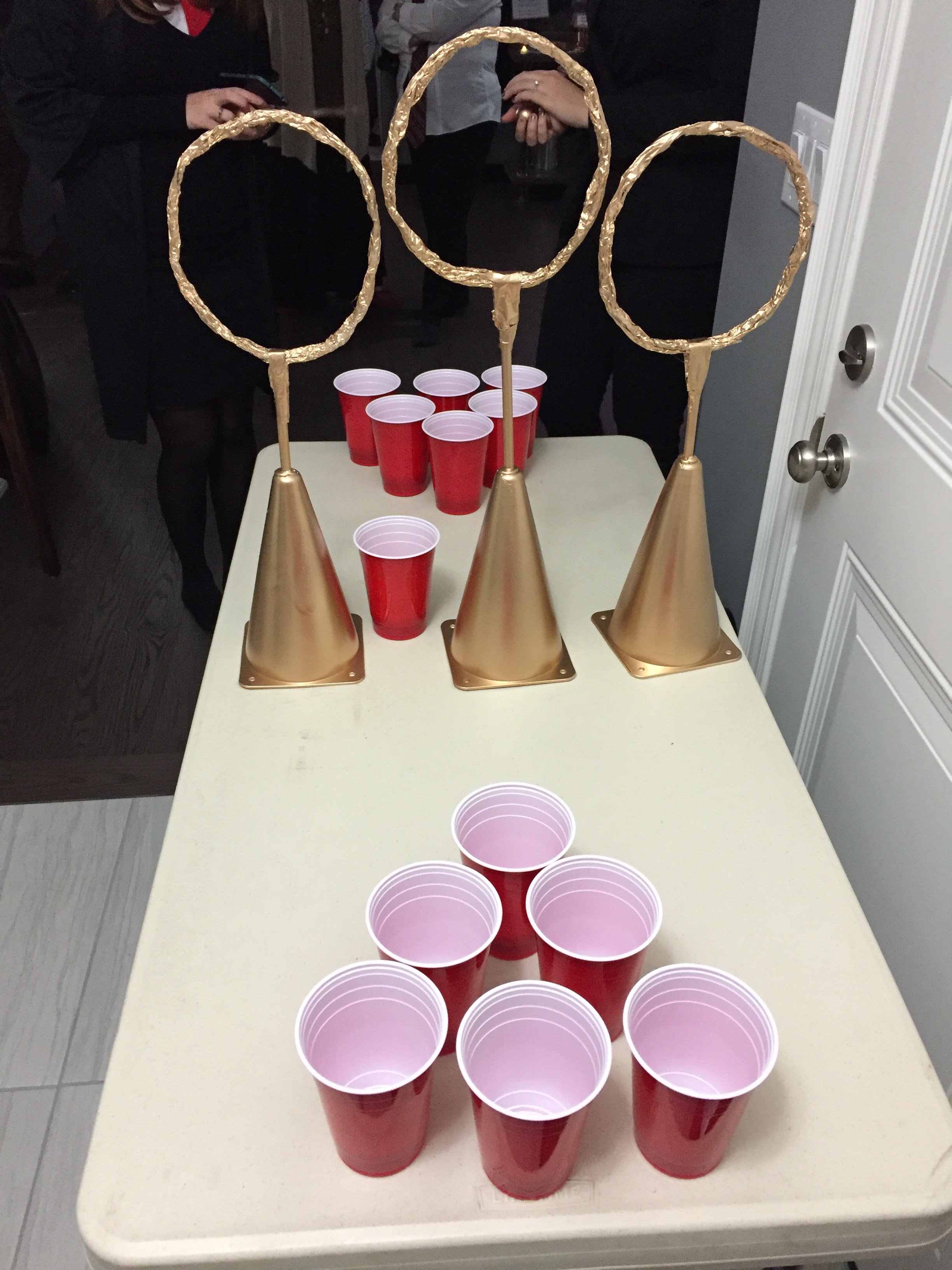 One of my favourite parts of the whole night was the photobooth I created out of foam Bristold board. It was so much fun seeing all my guests get into character and pose with the sign. 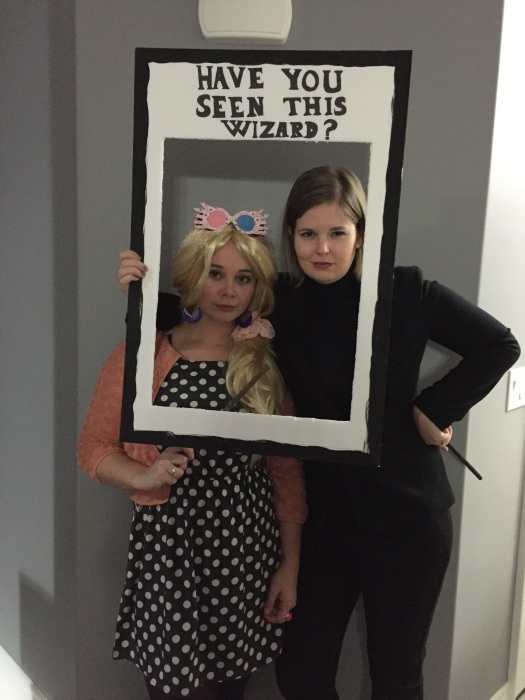 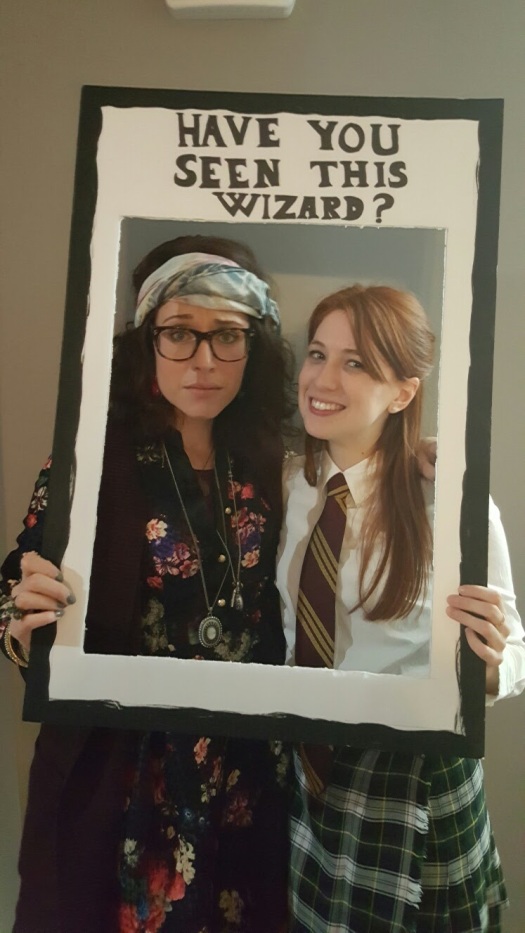 Finally, no birthday is ever complete without a birthday cake, and I just had to re-create the cake that Hagrid gave to Harry in the first movie. I showed this picture to the staff at Sweet Celebrations in Stoney Creek and Sharlene made a perfect and delicious Black Forest Cake. (Side note: This bakery seriously makes the most delicious and most beautiful cakes! They use only real ingredients with no artificial ingredients or dyes. They are also happy to work with any allergies. Make sure to check them out if you’re ever needing a cake and you’re in the region!) 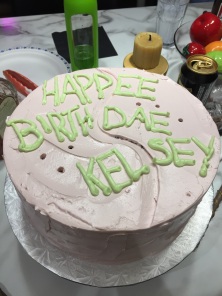 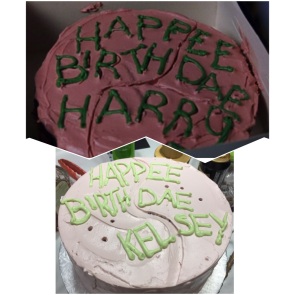 All in all, my Harry Potter Party was the thing dreams are made of! I was so excited to see all my ideas come to life and share my love of The Wizarding World with all my friends. If you have your own Harry Potter Party I’d love to see what you do!

One Reply to “Harry Potter Party with Free Printables!” 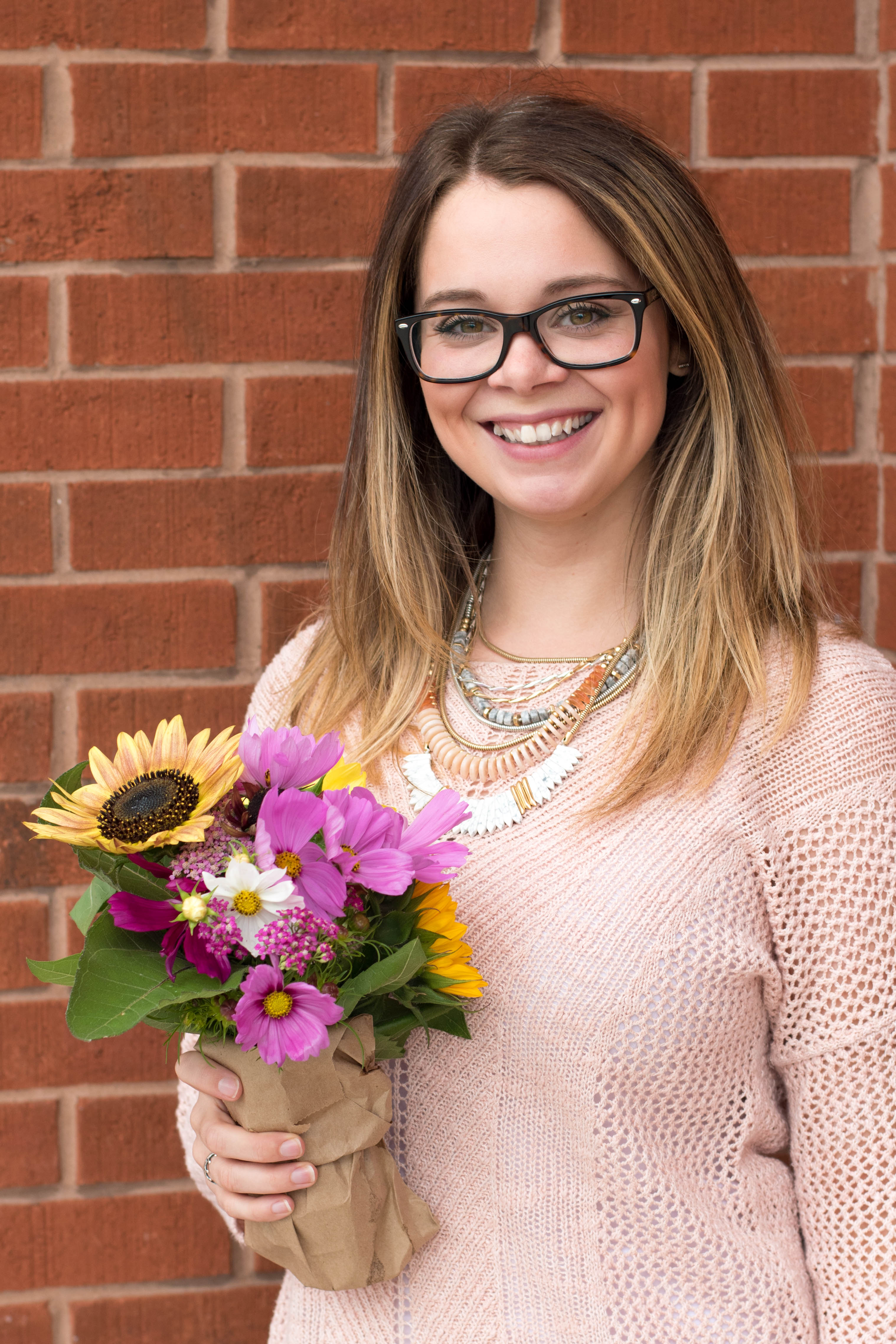 Hi I’m Kelsey – a Canadian blogger just following my bliss to food, travel, DIY and wellness. Join me as I explore the things on my “bliss list” and share everything I learn along the way.